The Cover for Bubble Fusion 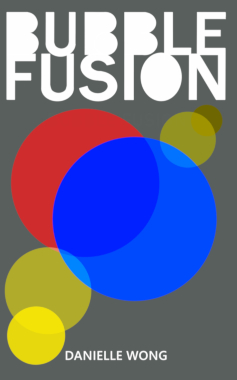 Bubble Fusion has two main pieces of art attached to it: the photo of me on the back and the cover. (Actually, the photo is also here on this website.)

Let’s start with the photo. I knew I would be needing a photo for the book and various sites. I found, through word of mouth, Ben Di Nunzio. I asked him if he would mind taking my picture. He was more than happy to oblige. We met one late afternoon and he took a lot of pictures of me outside among the trees, which is where I feel the most comfortable. The more time we spent together, the more comfortable I felt with him, the more I realized we had a few things in common.

I was nearly done working on Bubble Fusion. I needed to have a cover to go with the book. I tried one cover with a different artist, but it didn’t do the book justice.

By the time the book was done, I had a better idea of what I wanted on the cover. However, I wasn’t 100% positive it was a great idea.

He came up with several different pieces of work. Some were beautifully elaborate. In the end, we both decided the one with multiple bubbles intersecting, or fusing, with each other was the most representative of the book.

The bubbles represent the feeling that each one of us is trapped in some type of bubble. Some people are unaware of it and have no problems communicating and connecting with other people. Others are acutely aware of living inside a bubble and make conscious decisions to let people in or to ask them to leave.

Bubbles approaching other bubbles are people meeting each other. Overlapping bubbles indicate a closer relationship.

The bubbles on the cover also imply molecules coming together to create something or, in this case, someone.

As for the font used on the cover, well, Ben Di Nunzio went the extra mile. He drew the unnamed font on the book cover. Here, again, he pulled the concept of bubbles into the text.